Um, can signal to others that we’re not sure of what we’re saying or haven’t finished speaking yet. It can make us appear less confident – see ‘Hypnosis for Shyness‘ – and less capable than we may be. When you find yourself saying um frequently, it may be time to do some self-hypnosis. Verbal crutches like um can be eliminated with a bit of practice. Keep reading to know how to stop saying um.

Hypnosis can help you to stop saying um. The hypnosis process can help reprogram your mind so that you’re less likely to say um unconsciously. A hypnotherapist can hypnotize someone by creating a custom–made hypnosis track to help them stop saying um.

The hypnosis to stop saying um audio session will help you become more aware of when you tend to say um and give you tips on stopping yourself. The hypnosis process will also help boost your confidence so that you’ll feel more sure of yourself when speaking.

You can download the audio recording in mp3 format so that you can listen to them on your computer or your mp3 player. You can also listen to them via your smartphone or tablet.

How Do I Stop Saying UM When Speaking?

Pause Before You Speak

One way to avoid saying um is to pause before you speak. It will give you a few seconds to gather your thoughts and will help you sound more confident. Pausing can also be helpful in situations where you’re not sure what to say next.

Use Filler Words While Pausing

If the idea of pausing makes you nervous or uncomfortable, you can use other filler words while pausing. You may want to fill your pauses with “um” or “ah,” but try using another word like “so” or “well.” Other filler words commonly used include “you know,” “like,” and “okay.” Using filler words serves the same purpose as “um” by buying you time to think and collect your thoughts.

When you’re unsure what to say next, take a deep breath instead of saying um. It will help you think about your next words before speaking them out loud, but it won’t sound like you’re searching for the perfect words to use. The longer you breathe, the more time you’ll have to come up with your next sentence.

Practice Speaking in Front of a Mirror

Using hypnosis as we explained here, is also a safe way to stop saying um. The hypnosis process will help you become more aware of when you tend to say um and give you tips on stopping yourself.

If you want to stop saying um, the good news is hypnosis can be a great way to do it. Hypnosis is a process that helps you become more aware of your thoughts and emotions. It can also help you change the way you think and behave.

When you use hypnosis to stop saying um, you’ll learn to stay calm and focused.

If you’re looking for a more holistic approach to stop saying um, hypnosis may be the answer. Hypnosis is a process that uses relaxation and visualization to help you achieve a goal. In this case, the goal is to stop saying um.

The first step in stopping yourself from saying um is becoming aware of when you’re doing it. Most people say um out of habit, but they aren’t aware of what they’re doing. Hypnosis can help you become more conscious of your actions and make it easier to stop saying um on your own.

Once you see how often you use the filler word, you can make changes. You may need to pause before speaking or start taking breaths between sentences.

The hypnosis process is non-invasive and doesn’t require any special training. All you have to do is visit a hypnotherapist and talk about your goals (see self-hypnotherapy, too). Most people report feeling relaxed during the session and find that the process is relaxing.

What Is It Called When You Say UM a Lot?

If you’re curious about what it’s called when you say um a lot, it’s called cluttering or disfluency. Cluttering is a speech disorder that affects how a person speaks even at an early age, and disfluency is when someone has trouble speaking smoothly or without interruption. Cluttering can occur in any language, and it’s more common in children than adults.

Suppose you’re using um or like as a filler word. Discourse markers are words or phrases that people use to help them communicate more effectively. For example, um can be used to buy time while thinking of what to say next, and like can be used for emphasis or to keep a conversation going. However, using discourse markers too often can make you sound unprofessional or like you’re not sure of what you’re saying.

If you want to stop using um or like, start by knowing when and why you’re using them. Then, work on replacing them with other words or expressions. Also do not answer questions immediately, slow down and really listen to the question asked before formulating a response. 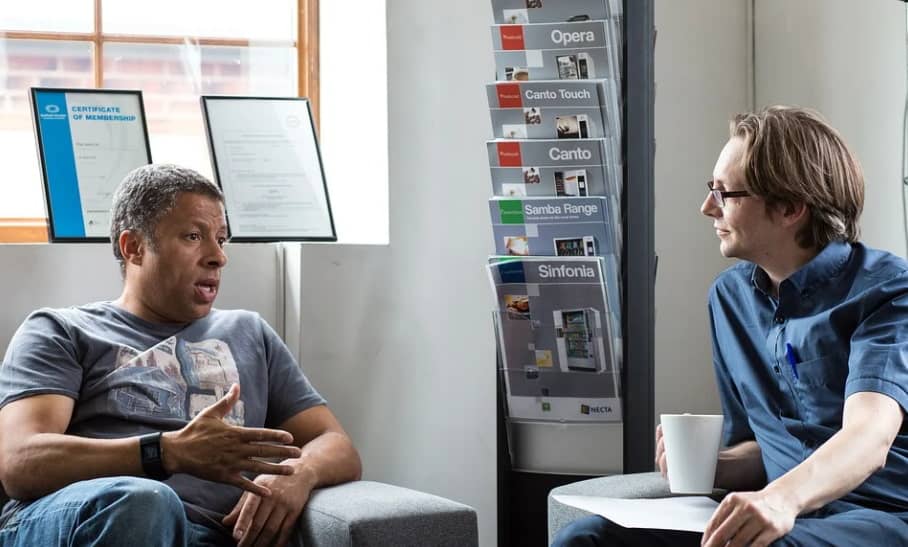 Is It Unprofessional to Say UM?

Why Do You Say UM?

If you’re wondering, “why do people say um,” it’s because they’re nervous or trying to avoid silence. New speakers or public speakers tend to use more filler words like um, but even seasoned professionals will say um from time to time. Many famous public figures have been caught saying um during their spontaneous speech, formal presentations, and other public appearances.

If you’re tired of saying um, ah, and you know and want help learning what to say instead, check out these tips:

Focus On What You Can Say Instead

It’s easy to get hung up on what you can’t say when someone asks you a question instead of listening to what they’ve said. If your coworker asks you what pages they need to proofread, don’t focus on the fact that you’re panicking because you didn’t hear them correctly. Instead, listen carefully and answer their question with the first words that come to your mind.

Taking your time after speaking gives others a chance to formulate their thoughts before they respond. It can help eliminate um and other filler words because there’s no pressure on the speaker or the listener. Starting with an apology or saying that you’ll think about what they’ve said before responding is another way to take your time.

Get Rid Of Filler Sounds and Words With Hypnosis Audio Downloads

If something is unprofessional, it’s typically not worth doing because you may hurt your chances of advancing your career or gaining respect.

However, there are times when saying um is okay and necessary, like using them as a discourse marker during casual conversations with friends and family members. And if you accidentally say um too often at work, there are ways to correct it by replacing them with other words or pausing before you speak. Finally, if you’re wondering what to say instead of um and like, there are many alternatives, such as looking for actual answers and taking your time when responding.